View one of our most helpful resources made just for you!

Where should we send your FREE brochure?

Top 10 Things To Do in Paris

In a city of so much artistic and cultural enterprise, it can be taxing to decide what to do and in which order. Below you will find a selection of 10 top things to do in Paris - some expected and some not!

Found in the Jehan Rictus Garden Square in Montmartre, the space was created in 2000 by calligraphist Fédéric Baron and mural artist Claire Kito. Composed of 612 tiles of enamelled lava, the phrase “I love you” is featured 311 times in 250 languages. Take part in the ritual with your loved one or lookout for the number of splashes on the wall, as they symbolize parts of a broken heart.

The Jardin du Luxembourg was the first French garden to be influenced by the Italian Baroque. Designed for the Medici Princess, Marie de Medici, work began on the gardens begun in 1612 and since its completion, has become a quintessential Parisian space and remains very popular. Strolling through the verdant gardens on a sunny day makes a welcome change of pace from the hustle and bustle of the capital.

Notre-Dame de Paris, also known as simply Notre-Dame, is a historic Catholic cathedral on the eastern half of the IIe de la Cite in the fourth arrondissement of Paris. Renowned for it stunning gothic architecture, its interior highlights include the spectacular rose windows and famous bell towers which can be climbed if you are prepared to walk the spiral footsteps of the North Tower. At the top, you will come face-to-face with startling gargoyles and a sublime view of Paris.

Inaugurated in 1993, the Coulée Verte René-Dumont also known as the Promenade Plantée, is a green belt that follows the tracks of the old Vincennes railway. Starting in the east of the Opera Bastille, it continues for approximately 2.9 miles, eastward ending in at a spiral staircase of the Boulevard Périphérique beltway. Much like the Jardin du Luxembourg, the fertile pastures of the Promenade are a welcome change of scene in this metropolis.

5. March Under the Arc de Triomphe

Standing at the centre of the Place de Gaulle is one of the most famous monuments in all of Paris, the Arc de Triomphe. The most triumphant of all arches was completed in 1836 to honour those who fought for France during the Napoleonic Wars. Names of the generals who fought are engraved on the inside of the arch. Considered by many, to be the linchpin of the historic axis; a sequence of monuments and grand thoroughfares throughout the city is a must-see spectacle on any excursion to Paris. 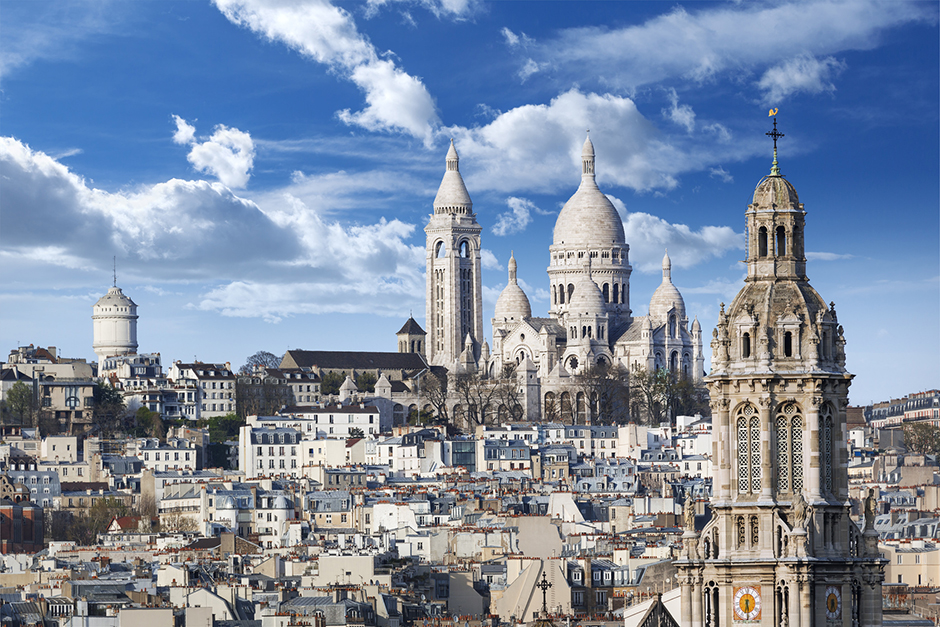 The Montmartre neighbourhood is perched on the hillside providing lofty views and is home to the workplaces of artists like Picasso and Van Gogh. Meandering through the streets, to avoid the crowds, will bring you through to another side of Paris that you would not have believed existed. Along the route, you will see the Basilique du Sacré-Coeur de Montmartre and be a spectator as you gaze out at the city below you.

7. Explore the Palaces of Versailles

The court was the centre of political power in France until the royal family was forced out in 1798 at the beginning of the French Revolution. The royal chateau in Versailles; was originally built during a time when Versailles was a country village, however today it is a wealthy suburb of the city. Currently, it is open for tourists to explore its interior with features including the Queen’s Hamlet, the Hall of Mirrors in the Grand Gallery and its verdant gardens of the chateau.

The 210-meter office skyscraper is a focal point of controversy for its juxtaposition with the rest of Paris's urban landscape. Despite this, the view from the top is the most beautiful in all of Paris, with visitors being able to see 40km away on a clear day from the 56th-floor observation deck. This is a site that may be well suited for those who have scaled the Eiffel Tower before or wish to gain a different perspective of the city.

Visitors to Paris would be strongly advised to obtain tickets for the Paris Opera, the primary Opera Company of France. Founded in 1669 by Louis XIV; as the Acdaemie d’Opera, classical ballet as we know it today arose from within the Paris Opera as the Paris Opera Ballet. Each year their high standard performances of ballet, opera, symphonic concerts, and vocal recitals are carried out in front of an audience of around 800,000 people, which means that nearly every production is sold out.

The Bateaux Mouches gives people the unique opportunity to view the city from along the stretch of the river Seine in open excursion vessels. Since the river is centrally located in Paris, a boat tour covers a great deal of the city. On their voyage, passengers can see the Eiffel Tower, Notre Dame, the Alexander III Bridge, the Pont Neuf, Orsay Museum and Napoleon’s burial site. Lunch and dinner cruises are available on a daily basis.

For more information on a Railbookers Paris holiday or any other holiday, please contact us.

Experience the Best of Spain by Train

From the sleek high-speed railways traversing the big cities to the calm regional lines running...

Allow us to present you with some of our favorite rail vacations for this year and we hope that you...

Last October, our Inside Sales Manager from our Laguna Hills office, Brittney Spotten, traveled to...